The Mutual Support of the Ordained Sangha and Householders

In honour of the 111th birth anniversary of Buddhadāsa, keynote speech presented by Christopher Titmuss (www.christophertitmuss.net) at The 8th International Buddhist Research Seminar & The 2nd International Conference on Buddhadāsa Studies, held on 24-25 May 2017 at the Buddhadāsa Indapañño Archives, Bangkok.

I would like to give my qualifications for speaking to the monks. I am a former Theravada Thai Buddhist monk. Secondly, I have had the privilege for more than 40 years to teach a Vipassana retreat at the invitation of the Lord Abbot of the Thai monastery in Bodh Gaya. For the last 18 years, I have had the privilege to teach Vipassana meditation retreats at Sarnath Monastery at the invitation of the Lord Abbot there. My connections with India and Buddha-Dhamma in India are very important to me.

Speaking to the monks in this morning, I would like to express immense appreciation of the opening speech yesterday and the wonderful talk on sustainability and economics which followed on from it. When I was listening, I thought there are many great, wise and cool monks here in the Theravada traditions in Thailand. It was great joy to listen.

With regard to the monks, there are aspects which are precious as a path of exploration. The Dhamma is not about revolution but making changes and seeing what need to be developed.

In one of my books [Freedom of the Spirit], I interviewed Venerable Ajahn Buddhadasa. I asked him one or two questions about monks. I also asked him about education. There is one important feature of monk’s life in the ordained Sangha.

The ordained Sangha provides, not completely, the continuity of stability in society. It is a living presence in the life of all of us. This symbolic significance of the monks offering this presence gives refuge and some continuity in a rather mad, crazy world in which we have to live. It is not enough to offer precious stability to society. The monks also have other great responsibilities. One of these responsibilities is to ensure that the teaching of the Buddha, the Buddha Sasana, is communicated insightfully, clearly and effectively to monks, to novices, to nuns and to the householders.

My big concern is that there is too big a gap between the ordained, male Sangha and the householders. We have to be mindful of the gap. For those who have been unlucky to go to London, you may have travelled on the underground train. When you get off from the tube in every station, the voice announcer says: “Please mind the gap.”

These areas are important. I am not undermining it. I have incredible gratitude for the monasteries for the offerings of the lay people. I love the art. I love the traditions there. There is a gap between women and men in this hall and elsewhere. To the Sangha, who preserve the beautiful teaching, and the suttas: “Please give us (householders) more teachings. We need the teachings.”

The Buddha is a remarkable example of what I am talking about. He did not just speak to the nomadic Bhikkhu Sangha and the Bhikkhuni Sangha. As an example, he spent in Saravasti in north India, 25 years in the park of the city for the three months every year speaking to the princes, royalty, Brahmins, the householders, men, women and children.

We need that tradition of speaking to the householders. The monks need to show there is much more to the Dharma than making merit, offering dana and the better rebirth.

Important as this is, we have got to go deeper. I listened to the two talks yesterday morning. I attended the meetings. Wow. These insightful speeches were important.

If you don’t know the answers to the questions that the lay people come to you with, it is easy to answer. You have the Majjhima Nikaya, Samyutta Nikaya, Uddaka Nikaya, Sutta Nipata and Dhammapada. You have great teachers like Tan Ajahn Buddhadasa and a great tradition. If you don’t know what to say, find out. Tell the people: “I will come and speak to you later.”

Second, this is not a revolutionary statement. Not at all. We need bhikkhunis. We just had the privilege to listen a bhikkhuni a few moments ago. The Buddha invited women to take ordination, to live a life of utter simplicity. All I can do is to give an encouragement to the Sangha to consider that woman and man work together. As an environmentalist, my friends in the environment movements in Europe love the Thai Theravada Buddhist monks because some monks ordained trees to protect the rainforests. If monks can ordain trees, you can ordain… you get the point. (Applause. Namely to ordain bhikkhunis)

Paco of BIA very kindly invited me to come. I love Thailand. I spend time in little Thailand in the Thai Monasteries in India. It is great privilege to be with you. To come and see. I had no idea of this immense Centre in Bangkok. I love the word “Suan Mokkh Bangkok.” When I walked here and looked around the environment, it looked just beautiful. A lake. Trees. Gardens. Clean Air. Suan Mokkh is here. We need monks. We need people to give teachings here. Like the Buddha, in Saravasti, in the park.

Ajahn Buddhadasa spent 60 years in the forest. The forest helped to make Buddhadasa. It contributed to his wisdom. There is the lovely monk’s tradition of Thudong (walking/pilgrimage). We can be completely absorbed in the nature. If you can, as a monk and lay people, please see the sky above, the earth below, the trees, lakes, forest and nature.

Two months ago, I watched three BBC documentaries about Thailand. The documentaries showed the beautiful relationship between the forest, jungle, spirituality and the monasteries. After watching those documentaries, I had tears in my eyes. What a country! What incredible beauty! What beautiful nature! What a Dhammajat! (Dhamma Nature)! Use the Dhamma nature please. In such beautiful stability, monks and lay people, we can grow.

I just want to add here, a health warning about democracy. I do apologize on behalf of previous generation English people, who were too lazy to learn a foreign language. We insisted much of the world had to learn English because we are so lazy. The Americans helped in this project to get everybody to speak English. In the exploration of looking and the inquiry together, we must be careful about the democracy.

Democracy has “Three Jewels.” They are not particularly good jewels.

1) Two Party State. There is the desire to impose on the world the two-party system with a little entertainment from the small parties,

2) The West wishes to give power and control over people, resources, and environment to the corporate world. This is also the part of ideology in democracy.

3) This is the pressure to convert people into consumers. The measurement of a human being is by consumption. We have the tradition of the Buddha Sasana. We have the tradition of the monks and nuns, who say “NO” to consumerism. It is a powerful statement. We have to learn to live in a different way. As Tan Ajahn Buddhadasa said: “We have to make the shift from selfishness to selflessness. We have to make our priority in life and commitment, to show less for me and more for you.” That is what Buddhadasa once said to me. “Less for me the more to you.”

He replied: “Their role is to be an example of living a life beyond all problem so that others will look within and live in the same way. Selfishness in the world is to be destroyed. Otherwise, the world will be destroyed.” (Applause). The Master has spoken.

I received an upset letter from one of the professors: “Mr. Titmuss. Who do you think you are? Don’t you realize Oxford University is one of the most prestigious universities in the world?”

I wrote back: “You just proved my point.”

I spoke with Ajahn Buddhadasa. I had this conversation with him that I am going to quote in a moment or two. In speaking with him, there is a little danger for the academics, school teachers, professors and translators and all those who work with students.

The danger is that the mind knows a lot but practice and experience is less. That is the problem with university life. We can know much in our head but in the depth of our being, we don’t know.

Our universities in England are quite often isolated from the local community. The university has little contact with the people around.

I spoke at the university in Amsterdam, some years ago. I said to the academics: “Please, take your economic/ecology students out to the local people. Ask the people: ‘How can we help you?’ ‘What way can we encourage your life and help to develop the community?’ ‘How do you develop as a human being?’ Then come back to the university not to talk theory but to connect with people’s real lives. Apply it. Learn from local people.”

Beloved academics can make a wonderful contribution. Listen not to the theory of students but their experience. Their experience of pressure, stress, anger, corruption, concern.

Ask them, what shows compassion? Where is the metta (loving kindness). Talk from experience. The experience and theory work together. Universities spend too much time upstairs in the attic of the mind. Get in the basement.  Look deeper. Upstairs depends upon the downstairs. Obviously.

Use the arts. Art is incredibly important. We need fresh dialogues with the teachers, students and professors. We listened yesterday to the translators, who are doing precious work. The precious work is often relying on three or four translators. Some who are rather bald. They are getting older. They are not bald because they are monks but because their hair is disappearing. And if it is not disappearing it’s white.

We need a new generation of men and women who can work together. There are such precious texts such as Ajahn Buddhadasa’s archive. We lazy English people have a mental defect against learning a foreign language. I think something is missing in my DNA. We rely upon our translators. When I heard the name “Suan Mokkh Bangkok” I had no idea but my heart and mind was delighted.

When I was kindly invited to come, I thought the centre might be a little office in downtown Bangkok. But, when I arrived here, it just delighted me. The combination of monks, and women’s ordination supports the Buddha and a great vision. There is a wonderful stability of the ordained Sangha.

I want there to be a bridge between householders and monks to meet to learn and share the deep teaching of the Buddha. It is very necessary for this to be developed.

This place is extraordinary. It’s remarkable. It has beautiful lakes and trees. I would like to thank all the householders (lay people) who gave dana for this. I wish to give thanks to the wonderful team who worked very hard to organize this conference and all the good volunteers.

Thank you to all participants.

“Practise” is one of the core advices of the Buddha. We need to practise, practise and practise. We are the real Buddhadasa, Dhammadasa and Sanghadasa. 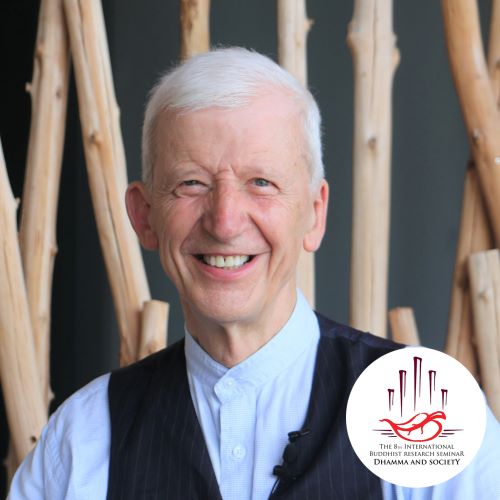