I wish to express my deep appreciation for the invitation to give these concluding remarks at the end of numerous activities to commemorate the 111th Birth Anniversary of Venerable Buddhadāsa Bhikkhu.

The New York Times, 9th July 1993, published a brief message on the passing away of Ajahn Buddhadāsa in the followings:

Bangkok, Thailand. July 8. Buddhadasa Bhikkhu, a monk whose non-traditional ideas transformed Thai Buddhism and earned him an international following, died today at his temple in Southeastern Thailand. He was 87 and was reported to have suffered a stroke in May.

As a critic of superstitious beliefs, materialism and militarism, Buddhadasa provoked re-examination of the religion that is followed by 95% of Thailand’s 58 million people.

In 1932, Buddhadasa founded Wat Suan Moke, a monastery in the forest about 300 miles southeast of Bangkok and a popular center for meditation for Thais and foreigners, including Europeans and North Americans. His numerous books and pamphlets have been translated into several languages.

Buddhadasa’s teaching challenged social convention, the monastic hierarchy and, occasionally, the Government. In the 1960’s Buddhadasa was accused of being a communist because of his attack on the growing materialism of Thai society.

‘He taught that spiritual development should come first, then human and cultural development, taking into account the environment,’ said Sulak Sivaraksa, a Buddhist scholar and social critic. ‘He felt that politics without morals is dreadful.’

Again breaking with tradition, Buddhadasa said in his will that he wanted to avoid the elaborate cremation ceremonies often held for high-ranking monks. Instead, he asked to be buried at Wat Suan Moke without delay.

According to Confucius, we can gauge filial piety by seeing whether the children still keep the wishes of their parents after 3 years of their passing away.

It has been twenty-four years since Ajahn Buddhadāsa passed away in 1993. We are commemorating his 111th Birth anniversary today with these events. In some way, we do not only feel our gratitude to this great teacher of Buddhism, we are also doing something to show our love, respect and gratitude.

In the age of globalization, the rise of Asian Super-powers and the conflict-ridden evolving ASEAN economic community, the issue of religion and economic-materialist relationships have to face more serious challenges. In the  traditional past, religion as a major force of culture seems to exert positive influence on the lives of people, whose imagination of a good life almost always include religious and spiritual elements. In today’s world, the answer to any and all ills seems to lie in the marriage between technological innovations and market economy. A transcendent Utopia, either Nirvana or Heaven seem more and more irrelevant. In this age of hyper-materialist globalization, when you have environmental problems, you create green technologies; when you have ageing population, you build care-giving robots; when you have problems in education, you build more internet networks; when you have extremist terrorists, you invest more in advanced apparatus of intelligence and technology of weapons. The list goes on.

Most of us here do not need to be reminded of Buddhadāsa’s three wishes, but I ask for your kind patience as I need to revisit them here. I quote:

There are 3 wishes in my life: 1) Help Buddhists or followers of any religion attain the deepest meanings of their religion. 2) Develop good understanding among religions. 3) Usher fellow human beings out of the influence of materialism. And I have constantly worked towards the perfection of these 3 wishes. If people in each religion fail to attain the heart of their religion, there would be no way an inter-religious understanding could be fostered. Thus, we must all try to help each other attain the heart of our religion together. Ultimately, they will be above the influence of materialism together.

I’d like to offer four observations, by taking the three wishes as pre-requisites of each other. Especially the first two wishes as a pre-condition of the last wish.

1) To be Buddhist includes helping followers of any religion to attain their religious goals. (It’s fascinating to me why a Buddhist monk wishes to help people of other religions to attain their goals.)

2) Inter-religious understanding is possible only after people in each religion attain the heart of their religion.

3) All religions face a common obstacle, namely, the influence of materialism.

4) Followers of all religion need to work together to rise above the influence of materialism.

In my concluding remarks today, I’d like to propose three points for further thinking and discussion. I truly believe that a lively discussion among friends is the only way to search for and establish any collective commitments.

1) I’d like to bring out the inter-connections of the three wishes.

2) I’d propose to place some of his specific teachings into the framework of the three wishes.

3) I’d offer some reflections on the recent developments of the materialist world in the past decades, which put new challenges for the last wish of Ajahn Buddhadāsa.

1. THE INTER-CONNECTIONS OF THE THREE WISHES

After reading and thinking about Ajahn Buddhadāsa’s works for more than four decades, (I first met him when I was a teenager), only recently I began to grasp the complex inter-connections of the three wishes. First, as a Buddhist by culture or by birth, we usually feel that people of other faiths belong not only to different religions, but more subtly, they belong to different truths. The first wish of Ajahn Buddhadāsa is telling us that people of other faiths or other religions are actually searching for and leading to the same truth. They are practicing different religions, but they are ultimately speaking, pursuing the same truth. In this sense, in being in religion, we are actually aspiring for a common goal. (This is the position of Ajahn Buddhadāsa on religious pluralism, which would require a separate seminar.)

Second, only after we have achieved this, we can build bridges in this socio-cultural world connecting with other religions. In other words, good understanding among religions is a result of a deeper understanding of one’s own religion.

Third, once wishes One and Two are achieved, we can work together to rise above the influence of materialism.

2. SPECIFIC TEACHINGS IN THE FRAMEWORK OF THE THREE WISHES

I understand that the teachings of Ajahn Buddhadāsa on Nirvana here and now, of empty mind points to the attempt to create a new looking glass or a new vista to “truly” see Buddhism as a cure for suffering. In other words, as Ajahn Phra Paisal Visalo puts it so well, when Thai Buddhists face sufferings, they go for merit-making. Both the poor and the rich perform merit making as a way of alleviating sufferings. Ajahn Buddhadāsa, on the other hand, points to another path, that is, the core teaching of Buddhism is actually a system of practice which cultivates the practitioner to see the world as “no-me and not-mine” (ไม่มีตัวกู ไม่ใช่ของกู) Instead of “Bun” Ajahn Buddhadāsa speaks of “Kusala” which is a gradual reduction of the ego, while “bun” if not properly understood, is a gradual accumulation of bigger egos. In this sense, “empty mind” is both ontological and epistemic-psychological (“no-me”: ontological, “not-mine”: epistemic-psychological).

Moreover, I understand that Ajahn Buddhadāsa’s teaching of ภาษาคน-ภาษาธรรม (Human Language-Dhammic Language) is a way of providing liberating possibility of attachment to symbols, most importantly, religious symbols. As I understand it, symbols are arbitrarily constituted signs through convention, which are supposed to lead people from the concrete material world to the abstract spiritual world. Take the cross, for example. As a physical tool of public punishment used by the Romans, it comprises of two planks of wood, put together in a certain angle. As a religious symbol, the cross becomes a symbol of the sacrifice of Jesus in his attempt to reconcile human beings to God. Ajahn Buddhadāsa gives the example of the term “Buddha” which on the level of human language indicates the historical Buddha who was spreading his Dhamma in Northern India over 2000 years ago. On the Dhammic level, Buddha indicates the “Dhamma” or the universal truth of Buddhism. This theory of ภาษาคน-ภาษาธรรม provides a philosophical basis for inter-religious understanding.

I may be wrong, but I understand that when Ajahn Buddhadāsa used the term “วัตถุนิยม” I suspect that he was using it in the sense of “นิยมวัตถุ,” that is, more of an ethical, psychological sense of a person losing out over greed of things or attachment to things in the material world. I suspect that he did not use it in the more comprehensive sense of a world of reality constructed by and generated through scientific technology dealing with the physical material aspect of the world. I will use the example of ผ้าจีวร or the monk’s robe as an example. As a physical thing, the monk’s robe could be made of cotton, wool or synthetic materials. As an object of commerce, the monk’s robe could be for sale in ห้างสังฆภัณฑ์. The monk’s robe could become a commodity.  But symbolically, the monk’s robe is meant to indicate a way of life for those who follow the 227 precepts whose main objective is to lead a noble path to the cessation of suffering for oneself and for others. The reason we pay respect to the yellow robe (ไหว้ผ้าเหลือง) in Thai culture is not because of the cotton or the wool, nor for the market price of the robe, but for the symbolic value of the garment of those in pursuit of the noble path in Buddhism.

It seems to me at this point in time, some twenty-four years after the passing away of Ajahn Buddhadāsa, the materialist world does not primarily indicate the world of commercialized commodities in terms of goods and services, but it indicates a world of hyper-materialist reality, made possible by the advancement and proliferation of digital technologies. New businesses are created every day, new avatars are being created every second, new projections of the future are making decisions on the lives of many marginalized people (I am thinking of the building of huge dams along the Mae Kong River and a spate of infrastructure mega projects in various regions of Asia). How do we overcome or rise above this “materialism?” It is no longer just materialism of things, sitting there waiting for our consumption or greed, it has become a master monster who conjures up new things, forming new selves, deciding new government policies, dictating new international trades, nurturing new dreams for the younger generation. How does Buddhism deal with this new form of hyper-materialism? I feel awkward to say this. But it seems to me the Dhammakaya has come up with an answer, conjuring up a version of hyper-materialist form of Buddhism.

If we do not want that same answer, and I believe most of us here do not want that, how do we proceed to pursue Ajahn Buddhadāsa’s three wishes? I think that part of the answer lies in Ajahn Buddhadāsa’s take on the issue of the relations between the symbols and the symbolized. But a lot more needs to be done. I hope I have provided a modest but sound basis for what we should consider when we continue our efforts to keep Ajahn Buddhadāsa’s teachings alive, relevant and crucial for us, as we continue our search for a Buddhist version of a good life during this time of so many “inconvenient truths.”

This brings me back to the entrance to Suan Mokkh’s main hall, where three Dhamma puzzles are inscribed on the doors.

Do not let Buddha Statues Conceal the Buddha,

Do not let the Tripitaka Conceal the Dhamma,

Do not let Sons of Common Folks Conceal the Sangha.

How do we invigorate the symbolized, through a proper understanding of the symbols?

With these three puzzles and a final question, I offer my concluding remarks as token of appreciation to the organizers for giving me this precious opportunity to share my thoughts with you today. 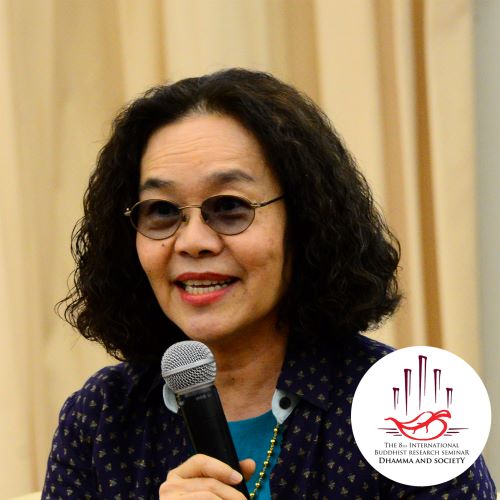