An Innocent Abroad: A Memory of Meeting Ajahn Buddhadasa

The author may be contacted at [email protected]

I was in the Peace Corps from 1973-1975 and taught English at a teachers’ college in Buriram in NE Thailand. I asked my fellow instructors to suggest a place to learn more about Buddhism as I had read a book about Japanese Buddhism that had aroused my curiosity. They suggested Pah Pong Forest Monastery in Ubon, a nearby province. On our term break, I took a three-hour train and bus ride there. I showed up unannounced and simply walked into the sala with my bags. I found Ajahn Chah giving a Dhamma talk in Lao to local villagers. I just assumed he was a local monk. I had no idea he was the abbot. In fact, I didn’t even know what a Dhamma talk was. I eventually got approval to stay there for the next week. At first, I slept on a mat in the sala of the monastery but eventually was given a bed in other quarters. It was the beginning of my Buddhist practice, and needless to say, I was lucky to begin at Pah Pong with Ajahn Chah. During my first year of teaching English, I returned to Pah Pong whenever I could. I got to know a few farang (Western) monks there and frequently interacted with Ajahn Chah. At that time, Ajahn Chah was well thought of in Buddhist circles, but he was not nearly as well known as he later became. I assumed that monasteries like Pah Pong were everywhere in Thailand.

At the end of my first year of teaching, I decided to go to Southern Thailand for the end of the school year hot season break. I asked someone at Wat Pah Pong to suggest a good wat (temple) to visit, and they suggested Wat Suan Mokkh. They may have told me Ajahn Buddhadāsa’s name. At that time, he was quite well-known in Thailand, but the name would have meant nothing to me.

I showed up at the wat in Surat Thani and again simply walked into it with my bags. I began to walk around and met a young man, and we began to talk. He was a university student also on a break. At that time, foreigners who could speak Thai were quite unusual. He enthusiastically invited me to use an extra bed that they had in their quarters.

I settled in and decided to fast while I was at the wat and not to speak. I wanted time to think and figure out Buddhism. It didn’t occur to me to ask the monks there to clear up my conundrums. I’d already spent hours talking to monks at Pah Pong and thought I didn’t have any questions I didn’t already know the answers to. I should mention that I was twenty-three, and felt I pretty well knew everything anyway.

The clearest memory I have of Wat Suan Mokkh was of a small stream next to our quarters. There was a small cement overflow there, so you could stand waist deep in the middle of the stream and bathe by using a bowl to pour water over you. I did that every evening wearing a sarong. During the day, I usually took long walks and enjoyed the beauty of the wat and the natural surroundings.

The night before I left there days later, I was telling a man how much I had enjoyed being there, and how much more beautiful Suan Mokkh was than Pah Pong. He asked what I thought about Buddhadāsa, and I said, “Who’s he?” He looked a bit taken aback, but just said that I really should meet the abbot before I left and took me to meet him. I remember that Buddhadāsa was sitting alone with his cane in the cool early evening. We were introduced, and I told him I was a student of Ajahn Chah. He asked me if I had any questions, and I told him that I liked Buddhism but I wouldn’t call myself a Buddhist because I didn’t believe in reincarnation or supernatural things. Well, that really set him off. I didn’t know that he was well known for his teachings on reincarnation and that they were quite different than most other Thai masters. He proceeded to give me a long talk about his reincarnation teachings. As I remember, the upshot was that reincarnation could be understood as being reborn in this life as a result of your actions. For example, a greedy person could become like a dog. I don’t remember all the details, but he was quite emphatic that it was not necessary to believe in reincarnation as rebirth to another life. I distinctly remember him saying that most of the teachers in Thailand had it all wrong. I spent at least forty-five minutes talking with him. I don’t have a clear memory of the details of what we discussed. I do remember we touched on celibacy and the role of women in Buddhism. Mostly, I remember that he was not at all taken aback by my skepticism. He was completely unassuming and behaved like he had all of the time in the world for me.

I was extremely fortunate to get this talk at that time because it encouraged me to look more deeply into Buddhism. I felt permission to interpret the supernatural aspects of Buddhist teachings in more naturalistic ways. I have always been grateful that Buddhadāsa took the time to interact with me. I remember thinking what a nice, sweet monk he was. I remember thinking that I just might come back and visit him in the future. It was only much later when I saw his books in a bookstore that I realized I had received a private session from one of the most famous monks in Thailand. 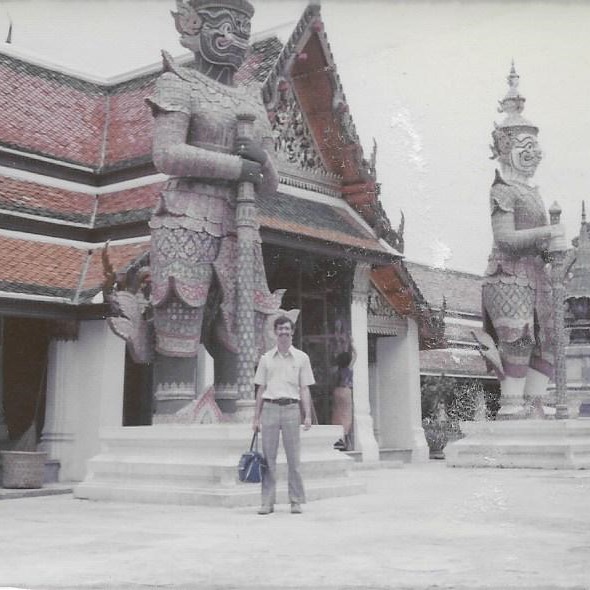